A big sassy drink brimming with raspberries and rye, this is a terrific cocktail for pre-batching to serve a crowd. Perfect for tailgating and picnics!

Shake Your Razz. Thanks to my girlfriend Pink Lady for coming over to be my drinks research partner/hand model.

To a pint mason jar add:

Fill jar almost to the top with ice, screw on the lid, and shake shake shake it like a Polaroid picture. Fill with more ice, if needed and serve with a straw.

*a cold shrub with a ratio of 6 parts fresh raspberries, 6 parts baker’s sugar, and 5 parts champagne vinegar (7% acid min.) by weight. Macerate for 48-72 hours and strain to remove solids.

The story behind the drink…

We’ve chatted about shrubs on this here blog before, as they’re dead easy to make with whatever you’ve got on hand. Shrubs are something I like to throw together as I’m going through fruits and vegetables during canning: the perfect specimens go into the canning jars, the moldy bits go into the chicken-feed bowl, and the bruised and banged-up pieces go into another bowl to be made into shrubs. Since all of my shrub recipes use pretty basic ratios by weight, it doesn’t matter how much or little fruit you end up with, as long as you’ve put enough acid in the ratio. Raspberries have a notoriously short window of ideal preservation; it seems like about a third of every package are a goopy mess. Perfect for making shrubs.

I was super honored to have my girlfriend Lime Rickey invite me over last weekend to co-host a party she threw for a cocktail club here in town run by SLC boozy blogger Chelsea (better known as Heartbeat Nosh). Her cocktail club is fancy, y’all. They have dues and a calendar going out for a whole year, and they are all very young, hip, tattooed mommy bloggers with Pinterest-worthy sponsorships and fabulous shit like that. The bar was set HIGH, and I was definitely the oldest and least inked gal in the room. And since when I get nervous my voice gets even higher and more twangy than usual (think Wynonna Judd channeling Minnie Mouse- it ain’t pretty), the ladies were a very tolerant group for me goin’ on and on about how much I love shrubs. And whiskey. They’re a hilarious and fun group of gals; check out their collective Instagram feed at #hbncocktailclub for some great ideas.

I chose this cocktail to shake up for them for three reasons: 1) I thought they might want to learn a bit about shrubs, ’cause they’re freakin’ awesome, 2) it’s easy to pre-batch for a crowd, and 3) it’s fun and pretty and requires a bit of audience participation, which is always a hit in my book.

It also happens to be pretty damn delicious: the amaretto gives a nice mellow sweet base note, where rye’s spicy kick (use at least 95 proof for this one) comes right through the zing of the shrub. Peychaud’s bitters keep the color bright and add a nice licorice tickle to keep things interesting, even as the drink gets watered down a bit. Black tea adds body and volume to this boozy drink without clouding the flavors, making it a great session cocktail. This is a primo drink for tailgating parties or picnics, since you can pre-mix all the ingredients in individual mason jars for shaking AND serving, load them all right back into the cardboard carriers by the dozen. Just add ice and a straw when you get to your party spot. Bring a few backup ingredients to mix refills on site and you are golden, my friends. I’ve made this exact same drink swapping out apricot, peach, or pear shrubs for the raspberry and they’re all pretty delightful. Try using mint, tarragon, or rosemary instead of basil, too. It’s all good. 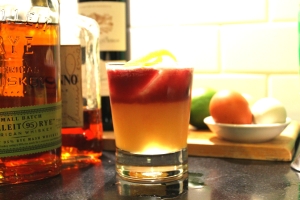 This week’s H.O.A.G.Y. (Help Out a Gal/Guy, Yeah?) comes via the ABG Instagram feed [@abourbongal] from a local cutie, Sparkling Rosé. Here’s her request:

“I’m throwing a birthday party for a friend. I want to have semi-fancy cocktails but I don’t want them to take forever to make; there will be a lot of people at the event and I’m the only bar tender [ABG note:  you go, girl!]. Have you ever made homemade sour mix?! I was thinking a New York Sour would be fun and easy.”

Sours ARE fun and easy! And really goddam delicious. Several bars in the SLC make delicious New York-style sours, two of my favorites being Whiskey Street and The Copper Onion. A couple of weeks ago we made a Tullahoma Whiskey Sour for my dear friend Strawberry Julep, but that was makin’ one cocktail, not prepping for a crowd. Commercial sour mixes are, IMHO, cloyingly sweet and thick. Some have tons of corn syrup, and lots of preservatives to keep them shelf stable. Once you’ve tasted fresh-made sour mix, you’ll be able to spot the bright notes of just-squeezed citrus quicker than a 75% off sale at H&M and it makes all the difference in the freakin’ world. Except for the run to Costco for your bags of lemons & limes [you’re going anyway, right?], and squeezing all those suckers, making the sour mix is dead simple.

The New York Sour makes for a terrific Valentine’s cocktail** or, in Sparkling Rosé’s case, a festive party drink. Why? Well, it’s got a nice sweet-sour balance point, making it perfect for soirées when you don’t know if you’ll have guests who like super-sweet cocktails or will be serving purists who just want some high-proof bourbon, served neat. The finishing float of red wine makes it super pretty AND festive. As booze historian David Wondrich describes, back in the day [like, the mid and later 1800s] barkeeps claimed all of their New York sours were topped with “the claret ‘snap’” –really any fruity red wine fancily declared ‘claret’ no matter the origin, but a Bordeaux works especially well in this application. It’s a fun bit of drinks history: the ‘sour’ is a fancy single-mixed drink adaptation of the ubiquitous Punch during the Victorian age. It’s kind of a proto-cocktail. The recipe I use is loosely based on the one Wondrich quotes in his cocktails history bible Imbibe! [p. 103], which he found in the 1869 Steward & Barkeeper’s Manual:

One Tablespoonful of sugar

Half of a lemon

Method: “Squeeze a portion of the lemon into the tumbler, which should be a quarter full of ice, and rub the lemon on the rim of the glass. Stir with a spoon…. In the manufacture of fixes and sours a small bar-glass or ordinary tumbler is employed.”

ABG note: wine glasses were really freaking tiny back in the day, right?

So, basically the barkeep was mixing up impromptu simple syrup with just a bit more than equal portion of citrus. And sours can be made with brandy, gin, amaretto, rum, applejack [The New Jersey Sour], just about any liquor, although the New York Sour was traditionally made with rye. In making homemade sour mix, I’ve found that the ratio of simple syrup to citrus is just about right at two parts syrup to three parts citrus. As noted before when making drinks in the ‘sours’ category, a little pinch of salt gives a great tart pinch to cocktails.

Here’s my super-basic recipe for homemade sour mix. Really, the ratios depend on what kind of citrus I’ve got on hand, and what I’m mixing with. More lemon goes great with whiskey, more lime with tequila. I’ve made great sour mix using grapefruit and lemon for amaretto sours. I’m sure you know the trick about microwaving citrus for 10+ seconds and rolling it to extract the most juice, ’cause you are a bar god/goddess. Own it!

Make a simple syrup with 1 cup boiling water mixed with 1 cup sugar. Stir to dissolve, and let cool to room temp. Meanwhile, juice 1 generous cup freshly squeezed lemon juice [4-5 large juicy lemons], and 1/2 cup juice from fresh-squeezed limes [4 limes].  Or, whatever ratio of citrus you like that gets you 2 parts simple syrup to 3 parts citrus juice. Strain the citrus through a fine mesh strainer to remove seeds and pulp. Mix citrus and syrup together [I like shaking & storing it in a quart mason jar], and it will keep in the fridge for weeks.

The great thing about mixing drinks at home [especially in Utah], is that you can mix them to YOUR taste, not to the letter o’ the state liquor law. So, fair warning, this drink is a bit stiffer than the one you’ll be served at a bar in the Beehive state. The egg white is totally optional – I’ve got fresh eggs coming out the wahzoo from my backyard hens so I’m not worried about cooties—it just gives the drink a little more velvety body and helps the wine “float.” If I’m making drinks for a crowd I leave the egg out ‘cause it’s a total pain in the ass to crack all of ‘em perfectly and you don’t want ANY yolk ending up in your drink [yellow strings of egg = gross].

Add all ingredients except the wine to a cocktail shaker filled with ice. Shake like crazy. Strain into a highball glass or tumbler filled with fresh ice. Pour wine slowly over the back of a spoon to “float” on top of the cocktail.

** In case you are color blind, never go to the ‘seasonal’ aisle in the store, or don’t have a calendar, I’ll remind you that Valentine’s Day is THIS Friday, y’all. It’s hard to believe, but it was just about this time last year that I’d started this here blog [I know! A year!], and posted a rant on why y’all should avoid restaurants for V-day, and might choose to make “Oh, You Sexy Beets!” Dirty Martinis at home, instead. It’s a tougher sell this year, since a Friday or Saturday holiday doesn’t get the middle-of-the-week buy-out. Sucks to be you. I also recently posted a blog over at my other gig at cityhomeCOLLECTIVE about Chocolate-centric stuff you can do all this month in the SLC. Why save the romance for one day?

A Foodista Drinks Blog of the Day!

Help Out a Gal/Guy, Yeah?

email me your questions! abourbongal@gmail.com
Follow A Bourbon Gal in Utah on WordPress.com